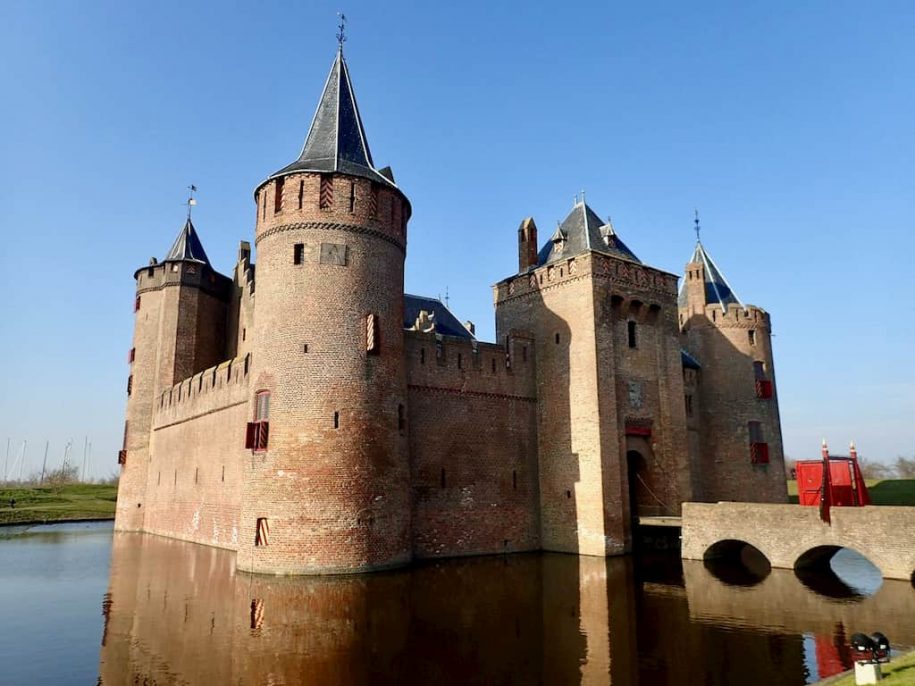 Amsterdam castle is a massive castle overlooking the Dutch landscape. Join us on our day tour to this and other castles near Amsterdam.

Amsterdam castle Muiderslot dominates the mouth of the river Vecht and used to be the key to the defence of Amsterdam.

Amsterdam castle is one of the oldest castles in Holland. It dates from the Middle Ages and is build out of red bricks.

The castle near Amsterdam is a stunning sight, towering over the flat green landscape.

The most stunning parts are the Knights Hall and the Western Tower. This tower has a narrow, winding staircase with 280 steps. When you climb these stairs, you can enjoy some vertigo once you reach the top!

The kitchen too is charming, with its ancient pots and pans, and the safe with precious spices from the Dutch East Indies.

Spices like pepper were so expensive back then, that only the lady of the castle herself had the key. Only she was allowed to spice things up!

Island on the horizon

Amsterdam castle Muiderslot lies next to the IJsselmeer, a big lake in the centre of The Netherlands. On the horizon you can spot a little island. This is mighty Pampus, a fortress island with two huge guns.

Pampus controlled the mouth of the harbor of Amsterdam. It’s part of the old defence line around Amsterdam, build before the First World War.

In summertime a ferry brings you from Muiderslot to Pampus in 20 minutes.

Amsterdam castle Muiderslot is located east of Amsterdam in the village of Muiden. This is a region with lots of little streams and waterways. More to the south and east these gradually give way to hills, woods and heathlands. It’s not a landscape you would expect in flat Holland!

Close to Amsterdam castle is the fortress village of Naarden. Naarden is shaped like a star. It’s one of the best preserved fortress villages of The Netherlands, with massive gates, defence ditches, gun emplacements, underground barracks and cobbled streets.

Moving on to more peaceful times: you should have a look at the nearby country estates from the 17th century at ‘s Graveland (we dare you to pronounce that). The summer retreats were commissioned by wealthy people from Amsterdam, back in our Golden Age. They are surrounded by parks and gardens.

The most famous estate is Trompenburg. It was owned by an admiral and looks like a ship floating on the water.

At Holland Windmills we have a private Amsterdam castle tour to the best parts of this surprising region. This area is perfect if you’re into Amsterdam castles and gardens.