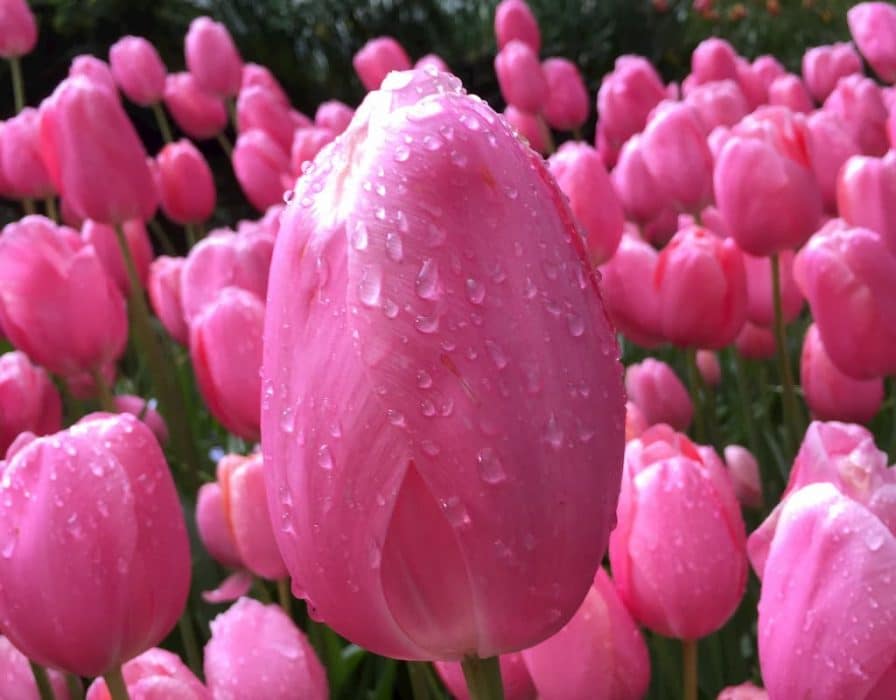 Posted by Holland Windmills on January 21, 2020 | Featured | No Comments

It’s not far from Amsterdam to tulip fields. Our tour takes about 45 minutes to get to the tulip fields south of Haarlem.

The history of the tulip in Holland is bizarre.

People have been growing exotic flowers and plants in this particular area for many centuries.

Gardening became a popular activity in the sixteenth century.

Especially the tulip had an extraordinarily attraction: some bulbs fetched more than ten thousand guilders. This amount  could buy you a complete house on the canals in Amsterdam.

The tulip crash of 1637 put an end to the madness, but not to the ever-blooming flower nurseries in the region.

Amsterdam to tulip fields | the tulip

The origin of the flower trade in Holland lay in the sandy grounds around Haarlem. At the end of the sixteenth century the large-scale cultivation of flowers had started, and of one flower in particular: the tulip.

The love for the tulip, and more generally for botany and gardening, is a direct consequence of the Renaissance.

In the sixteenth century many ideas from classical literature about living on land and living in nature reached the young Republic from Italy and France.

The elite read the work of Virgil and Horace and admired the great men of Roman history. Many famous Romans retired to the countryside after their retirement. They were not ashamed of doing simple farming and gardening work.

The noble simplicity of gardening was a source of inspiration. Rich Dutch merchants started relaxing in the fresh air. Gardening with exotic plants became a serious hobby.

Countryside properties gained prestige; collectors and growers liked to outdo each other with the presentation of even more curious, rarer species.

In Europe, a large network of scientists, doctors, botanists and garden enthusiasts set up collections, nurseries and gardens and published extensively about their finds.

In 1593, the newly established University of Leiden succeeded in bringing one of the leaders in that network, Carolus Clusius (Charles de l’Ecluse), to Holland.

Clusius had been head of the imperial gardens in Vienna from 1573 to 1588, and he was the international authority in the field of Turkish flora.

It was Clusius who had given the tulip its scientific name. He brought his own tulip collection to Leiden.

Tulips in the Red Light District

Initially, tulips and other exotic plants were mainly found in pharmacies. Outside the walls of Amsterdam lay the famous gardens of Walich Syvertsz.

He was a pharmacist in the Warmoesstraat, which is nowadays in the middle of the Red Light District. Syvertsz. is credited to have cultivated the first tulip in Amsterdam in 1573.

On of the largest traders in plants and exotic products in Europe was Emmanuel Sweerts. In 1612 he published a ‘Florilegium’, a beautifully executed book full of tulips with intricate patterns and dizzying variations in color.

It was both a botanical-scientific work and a catalog of available merchandise.

Many bulb nurseries were located in the immediate vicinity of Amsterdam, but most were in the dune area around Haarlem.

A new canal between Haarlem and Leiden in 1657 gave this region an important boost. Growers established themselves in Lisse, Noordwijk and Uitgeest.

Settling close to the source

Some collectors settled close to the source, and literally moved from Amsterdam to tulip fields. The powerful Amsterdam regent Adriaan Pauw bought the old castle of Heemstede in 1617, which he designed according to the requirements of the time.

He received prominent visitors such as Maria de ‘Medici, queen mother of France and Maria Henriette, queen of England.

But Pauw was mainly concerned with the garden and the tulip. He was one of the most fanatic growers of his time and devoted himself to a tulip in particular, the glorious ‘Semper Augustus’.

The value of this tulip rose to about a thousand guilders each in 1623, with an average annual salary of about one hundred and fifty guilders. In 1633 the Semper already cost around 5500 guilders.

Then the trade exploded into a true ‘tulip mania’. In the years 1635-1637 a single Semper ball was sold for almost ten thousand guilders, an amount for which a complete house with garden, coach house, stable and horses could be bought in Amsterdam.

The market then collapsed. The tulip crash of 1637 put an end to the wind trade, but not to the nurseries, which have always dominated the region.

How far is it from Amsterdam to tulip fields?

It’s about a 45 minutes drive from the centre of Amsterdam to tulip fields.

Looking for tours from Amsterdam to tulip fields?

Have a look at our tour page here. We can provide a private tour to all the best flower spots during spring. During this trip from Amsterdam to tulip fields we provide everything including transport from and to your hotel.

A tour from Amsterdam to tulip fields of Lisse is a day tour and can be catered to your wishes. We can for example also include a visit to the windmills.