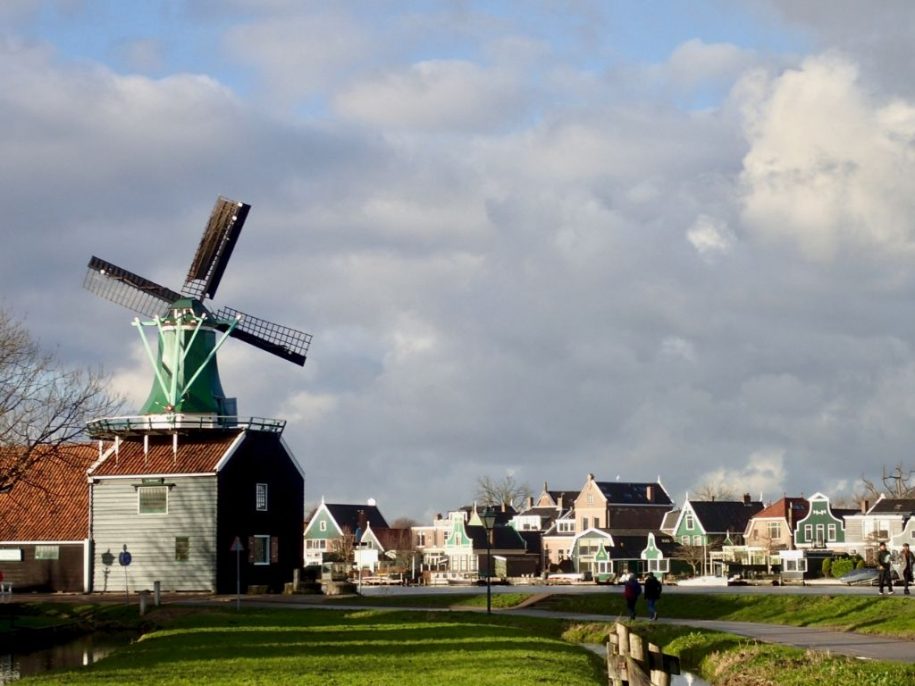 Are you visiting the Netherlands? Here are the best day trips from Amsterdam to see windmills.

It might be a good option for those short on time or not willing to deal with the practical aspects of planning a day trip from Amsterdam. Best is to avoid tourist traps during day trips from Amsterdam to see windmills

On this 5 hour tour we’ll see -and taste- the best Holland has to offer, a stone’s throw away from the busy Dutch capital. It is considered one of the best day trips from Amsterdam to see windmills

Zaanse Schans: most famous windmills of the world

Spectaculair first stop for day trips from Amsterdam to see windmills is of course the Zaanse Schans.

Here we have the opportunity to visit the best windmills in Holland.

In the Seventeenth Century the Zaanse Schans was the biggest industrial area in the world. A Dutch windmill basically was a little factory. Each windmill was custom build for producing various product like paint, cooking oil, paper and wood.

On the bank of the river Zaan hundreds of windmills were grinding, pounding, sawing and crushing. Products of the Zaanse Schans were exported all over the world.

The dozen windmills on the Zaanse Schans are still fully operational. On a good windy day we’ll see them turning at full speed.

Our favorite windmills of the Zaanse Schans

Our personal favorites are De Huisman and Het Jonge Schaap. De Huisman grinds spices from the East Indies. It is probably the best smelling windmill in Holland. As soon as you enter you’ll smell spices like cinnamon, cloves and pepper. Het Jonge Schaap produces high quality wooden planks for shipping, building and carpentry. You can see the enormous, wind powered saw blades cutting logs at an amazing two meters an hour.

We at Holland Windmills think this is the best windmill to visit in Holland, period.

The area is also famous for one of the best inventions in the world: this is where chocolate was invented!

Try some delicious Dutch chocolate or one of the other Dutch delicacies, like stroopwafels or speculaas. The Zaanse Schans also has an excellent cheese farm.

What to eat during day trips from Amsterdam to see windmills?

Our next stop is lunch (not included in the price). Our guides know the best little shops and can help you avoid the expensive tourist traps.

Depending the preference and taste buds of the group, we have 3 options:

The fishing village Volendam is right next to the IJsselmeer, the largest fresh water lake in Europe. On a clear summer day this lake is filled with old sailing ships. Volendam is famous for its seafood.

Volendam is a good place to try:

Another option for lunch is Monnickendam, an old and very picturesque village with good restaurants. For example a ‘toko’, where you can try that other famous Dutch food, Indonesian:

The third option is Edam, and of course this is heaven for cheese lovers. We can point out some shops that sell some really good, authentic Dutch cheese:

In summertime Edam has a cheese market, where farmers bring in their cheeses in flat bottomed boats and unload their cheese on the quayside.

There the haggling starts with the cheese sellers about the price. The cheese market is one of the oldest open air markets in Europe, dating back centuries.

Last stop is the area of Waterland, just north of Amsterdam. We’ll visit one of the hidden villages of this area.

The most famous is Broek in Waterland. In the Seventeenth Century ‘Broek’ was one of the richest villages in Europe, a village where rich people from Amsterdam came to escape the summer heat.

The most famous inhabitant was Neeltje Pater, a woman who inherited some of the fortune of the Dutch East India Company. By today’s standards her estate was worth about 30 billion euros! Some say she threw her fortune in the old harbor and some adventurers even dredged it, but found nothing.

Nowadays Broek in Waterland is a quiet little country town, known for its beautiful gardens. Especially in spring and summer, Broek is full of flowers, like hydrangeas and roses. The centre is the old church, a remarkable old building from the Fifteenth Century.

On this small group tour we go places where big tour busses cannot come. The countryside around Amsterdam is an area of small villages, narrow streets and tiny country lanes. On this day trip you will see places that are not accessible for mass tourism.

All our guides are locals and are rooted in Amsterdam. We know Amsterdam and the countryside by heart.

Our meeting point is Cafe de Pont in Amsterdam-Noord. This cafe is easily accessible with the free ferry that departs behind Amsterdam Central Station to Buikslotermeerplein.

Book one of our days trips from Amsterdam to see windmills now!

Book your tour to the windmills now