Holland Windmill tour: see the national treasures of the Netherlands 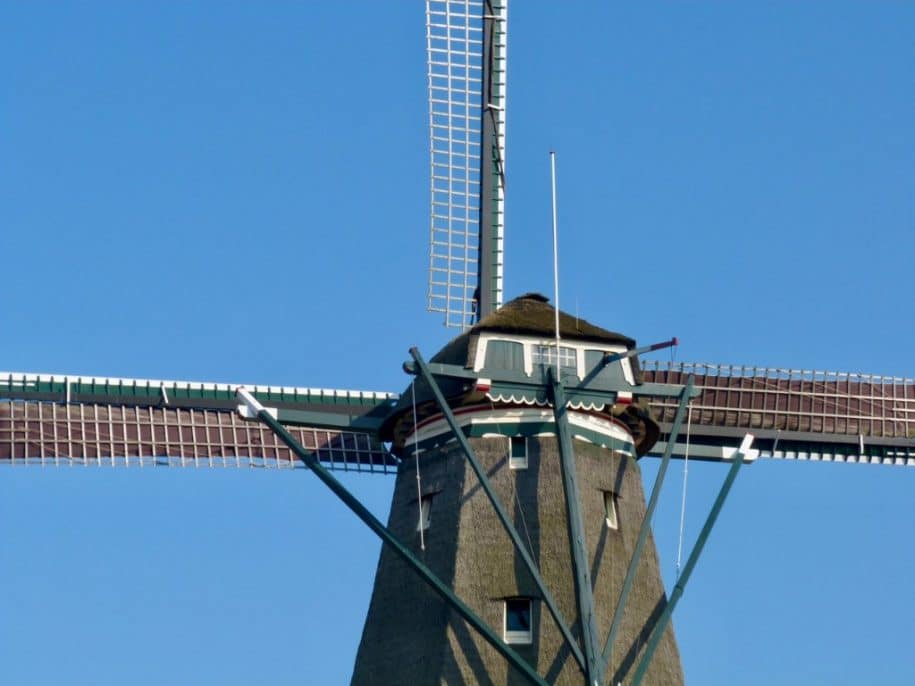 The windmill was invented in medieval Holland to keep us Dutch dry, as the country is below sea level. Do a Holland windmill tour during your stay in Amsterdam.

Windmills have been draining the water since hundreds of years. Holland was literally formed by windmills!

The first windmills were pretty basic. Four sails on a building, that was it. Later, the medieval Dutch came up with the idea of a rotating building with sails, so they could turn the mill into the wind. This first design was called a post mill.

Soon the Dutch nobility came up with an idea to make money with this new invention. By building grain mills and forcing their farmers to pay for grinding, they had a good income.

See the windmills in action

It took the Dutch another few centuries to come up with better type of mill: the cap winder windmill. Instead of rotating a cumbersome building with sails, with a cap winder you only rotate the top part. This cap with the sails attached can rotate 360 degrees.

The rest of the building stays in place. This design makes it much easier to turn the sails. And you can attach much larger sails to a cap winder mill, too, which means more power. A cap winder has about 35 horse power, all free energy.

How the Holland Windmill drained the water

By the 17th century the Dutch were ready to take on big and deep lakes, like the Beemster and the Schermer. These were surrounded by a dike with dozens of cap winder mills on top. These mills relentlessly drained the water over the dike and into the sea. In a few years time, these big lakes were sucked dry.

By the end of the 17th century, the mighty Dutch windmill was spread all over the country. Doing many different tasks beside draining water. Dutch windmills were sawing wood, crushing stone, hammering iron, making paper.

Each windmill was custom build for the job, with many different types and thousands of different kinds of cogwheels and mechanical parts.

A Dutch windmill is built with a dozen different types of wood, depending the function.

Larch for the planks, oak for the construction beams, hard tropical wood for the cog wheels. Some types of wood are even self-lubricating.

Some mills weere built as Lego: you could take them apart and rebuild them somewhere else, after the job was done.

Go on the Holland windmill tour

Holland Windmill at the Zaanse Schans

On the Zaanse Schans you can see how a Holland windmill works. In the morning, as the tour arrives, the millers go out onto the platform under the sails, to check out the direction of the wind.

Then they turn the big wheel that is attached to the cap and the sails. Within minutes, the sails are pointed into the wind. If there’s a light breeze, the miller gives the sails a push and they start turning!

There’s never a bad time to come to Holland to see windmills. As long as there’s wind, they will spin.

But a really good time for a Holland Windmill tour is the second weekend of May. That weekend are the National Windmill Days in The Netherlands. In the province of North-Holland, more than a hundred windmills open their doors to the public.

During the National Windmill Days, the windmills of the Zaanse Schans are ‘in joy’ and decorated exuberantly. Flags fly from the caps, and the sails are neatly woven through the fences. Hearts symbolize love and rings faithfulness; there is also an enormous variety of stars, figures, garlands and the like.

Visit the Zaanse Schans during the Holland windmill tour

Holland Windmills provides a carefree package for your holiday in Holland and Amsterdam: an easy pickup point, smooth transport from Amsterdam. See the best Holland has to offer outside of Amsterdam, book your Holland Windmill tour.