A tour from Amsterdam to the tulip fields 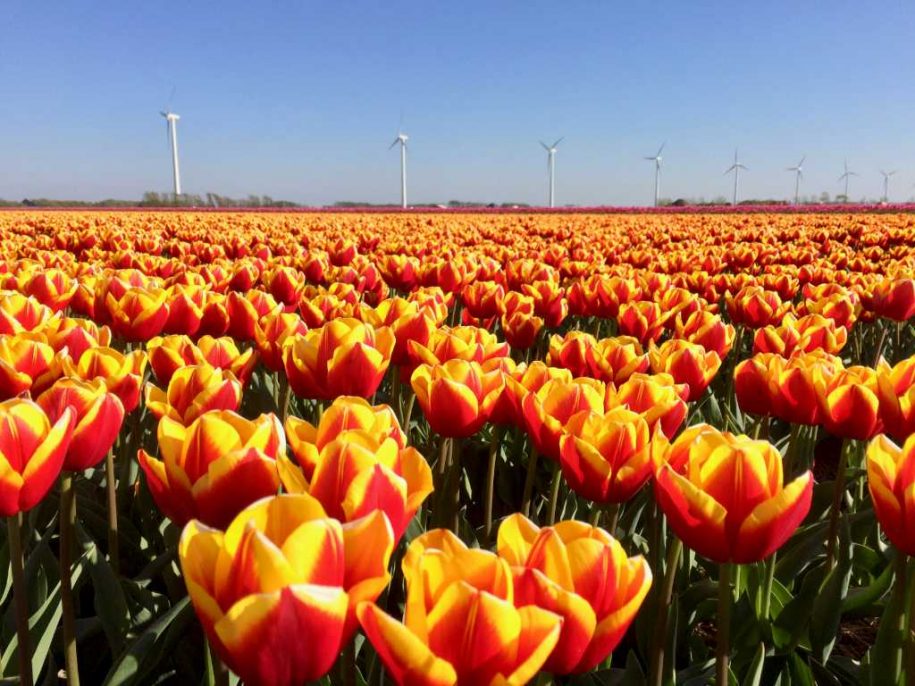 Posted by Holland Windmills on April 8, 2019 | Featured | No Comments

The Keukenhof is the most famous flower garden in springtime in Holland. And a tour from Amsterdam to Keukenhof is probably the most popular tour in April and May.

But few people actually know that the largest contiguous flower bulb area is not located here, but in the top of North Holland.

The Anna Paulownapolder in the most northern part of North Holland is home to the largest contiguous area in the world, accounting for ten percent of Dutch exports. In the spring, the brown-gray fields change into a colorful mosaic of bulb fields.

After this area was drained in the mid-19th century, the farmers (being farmers) complained about the poor sandy soils, where nothing wanted to grow. That changed around 1911, when the first bulb farmer set up shop here. These poor ‘ghost soils’, where dune sand mixes with light clay, proved ideal for growing flower bulbs.

The center of gravity of bulb cultivation is now around Breezand, north of Anna Paulowna. But in the surroundings of Julianadorp and Callantsoog the fields are also colorful in the spring.

Of course, the tulip is the most important bulb. Tulips are on about half of the bulb fields. But in early spring there are also lots of daffodils and narcisses.

In the old days, everything tulip was done manually, like peeling and sorting the bulbs. Bulb growing was very labour intensive and everybody in the area participated, even the kids.

Nowadays nearly everything is mechanized. But there are still lots of things that have to be done by hand, like removing the ‘bad’ tulips. You’ll always see workers stooping over the flower beds.

In May all the flowers are mechanically ‘beheaded’ by machine. This means that the flower is removed from the stem. The bulbs are then dried and packed.

Alternative tour from Amsterdam to Keukenhof

At Holland Windmills we like to offer this part of Holland as an alternative to a tour from Amsterdam to Keukenhof. It takes only 15 more minutes to get to this area, but it is a lot less ‘touristy’ than Keukenhof.

There are a couple of villages that like to show off with their flowers, like Zijpe. During april, the village has activities around this theme every year. There are also painting workshops, you can skate and even fly over the fields with an airplane.

Another village is Anna Paulowna. The Flower Days of Anna Paulowna attract numerous visitors every year. During the Flower Days, at the end of April, all kinds of objects, including ships, are decorated with flowers. The Poldertuin in Anna Paulowna is freely accessible in the spring.

A flower bulb show takes place in Breezand in early spring, where growers display their showpieces. The Spring Garden is a stage for this northern sandy area. As the spring progresses, the fields become deeper in color.

Some growers open their company for a look behind the scenes. One thing the farmers really don’t like, is people tramping through their fields! The growers are afraid that people will bring diseases. Only one contaminated piece of soil on the sole of somebody’s shoe could ruin the industry. To prevent people from entering the beds, growers put up warning signs and selfies spots.

Book a tulip tour with us