The fishing village of Volendam 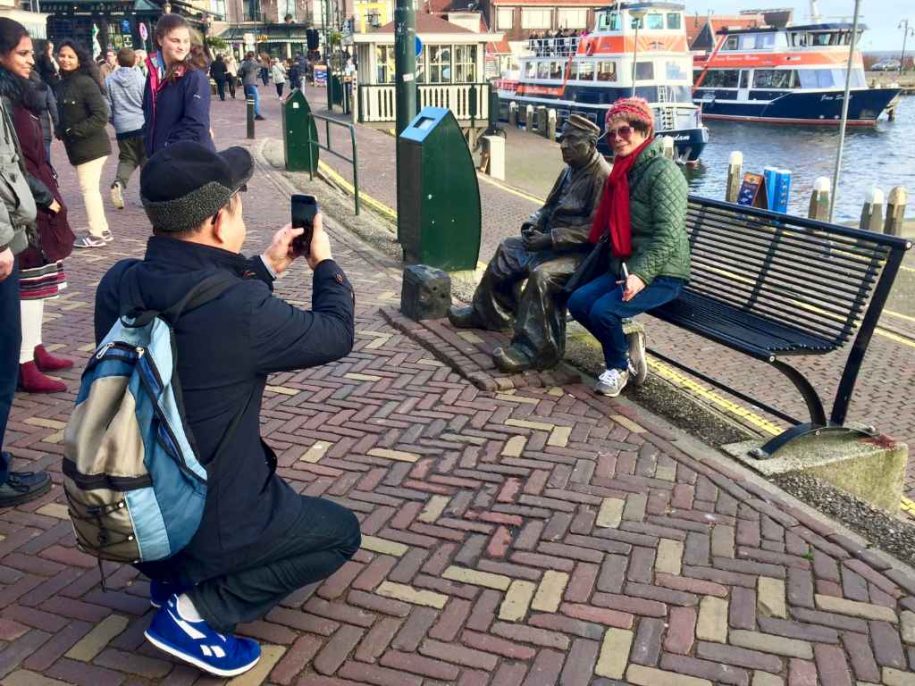 Posted by Holland Windmills on April 10, 2019 | Featured | No Comments

For five centuries, Volendam was an isolated fishing village where old traditions, traditional costumes and the Catholic faith could easily survive.

More than two million visitors from all over the world find their way to Volendam every year. Their main goal: the Dijk, a long line of shops and eateries, hidden behind the colorful facades of former fishermen’s houses. Only with a lot of imagination can the former Volendam be recognized here.

The change took place at the end of the 19th century, when artists discovered the fishing village. The cozy houses and traditional costumes in particular were immortalized on canvas. Part of the production ended up in Hotel Spaander, where the artists sometimes paid for their living and living with paintings. The income of artists and other visitors were more than welcome, because the fishing industry was hit hard when the Afsluitdijk was built in 1932.

Sea fish disappeared and the fleet -that once had 240 fishing vessels- shrunk to around twenty small boats and eight North Sea fishing boats. The fresh fish they bring in is auctioned in the modern fish market in the harbor. The former fish auction, a wooden structure on stilts from 1934, has been preserved and now forms a landmark along the Dijk. Nearby the ferry departs from the Marken Express to the former island of Marken. 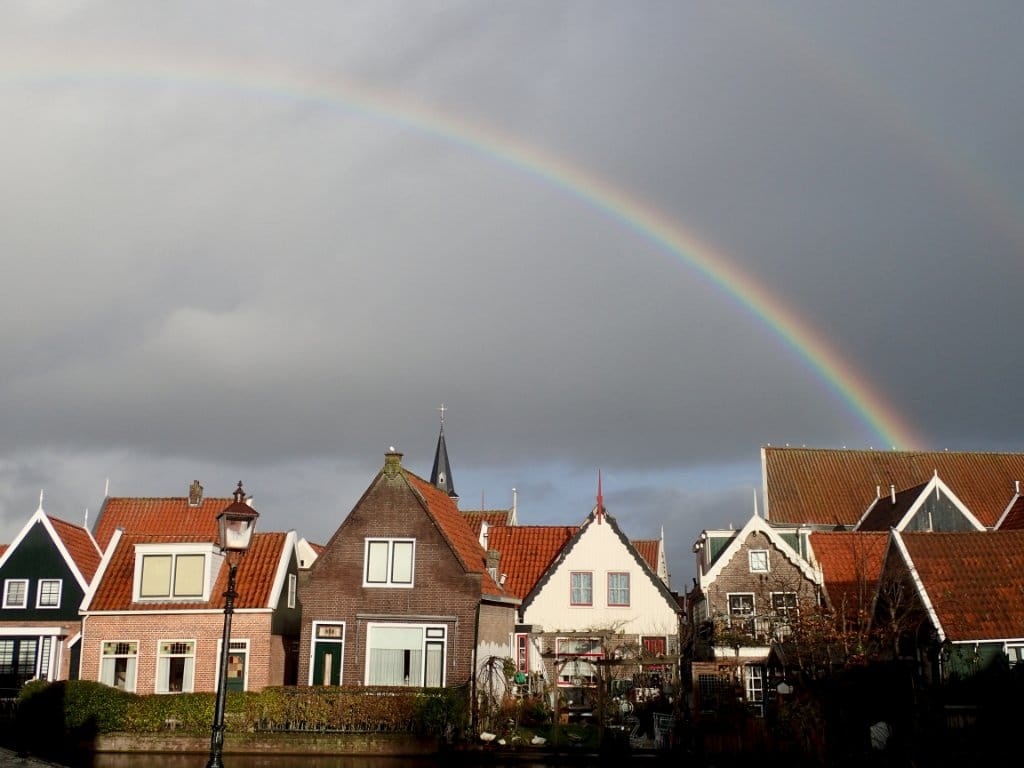 Due to the rapid growth of Volendam, few old buildings are left. Worth seeing is the maze of narrow streets behind the Dijk (around Dril, Havendijkje and Meerzijde), which is also aptly referred to as The Maze. You will find the Volendams Museum in the same area. Here you can see how the fishermen lived and worked from the end of the 19th century to 1950. There are also paintings and drawings by the many artists who have visited the village, supplemented with costumes, jewelry, postcards, images, literature and songs about Volendam. The Volendams Museum also houses the Cigar Band House with mosaics of eleven million cigar bands.

Volendam is well known in the Netherlands because of many successful pop groups and singers, such as The Cats, BZN, Piet Veerman, Jan Smit and Nick & Simon.

Situated next to Volendam is another famous village, Edam.

Edam is where local cheese makers used to sell their cheese to cheese merchants. The tradition lasted until 1922 and was restored in 1989 for tourists. On Wednesday mornings in July and August you can see how the round Edam cheeses are traded at the cheese auction. Carriers carry the cheeses, after which they are sold with a bang. The core of the spectacle is the Kaaswaag from the 18th century, with a permanent exhibition on cheese making inside. You can also taste and buy cheese there. The 19th-century tile panels on the façade depict Trade and Industry. The ornate clock tower further on is a remnant of a church which was largely demolished. The carillon consists of nineteen bells that partially hang on the outside of the tower.

Edam is a well-preserved Zuiderzee town. Shipbuilding, fishing and cheese trading provided wealth until the connection with the sea disappeared in the 18th century. As a result, there was no money for modernization and you can now walk past historic tea domes, city farms, canals, warehouses and a small shipyard. 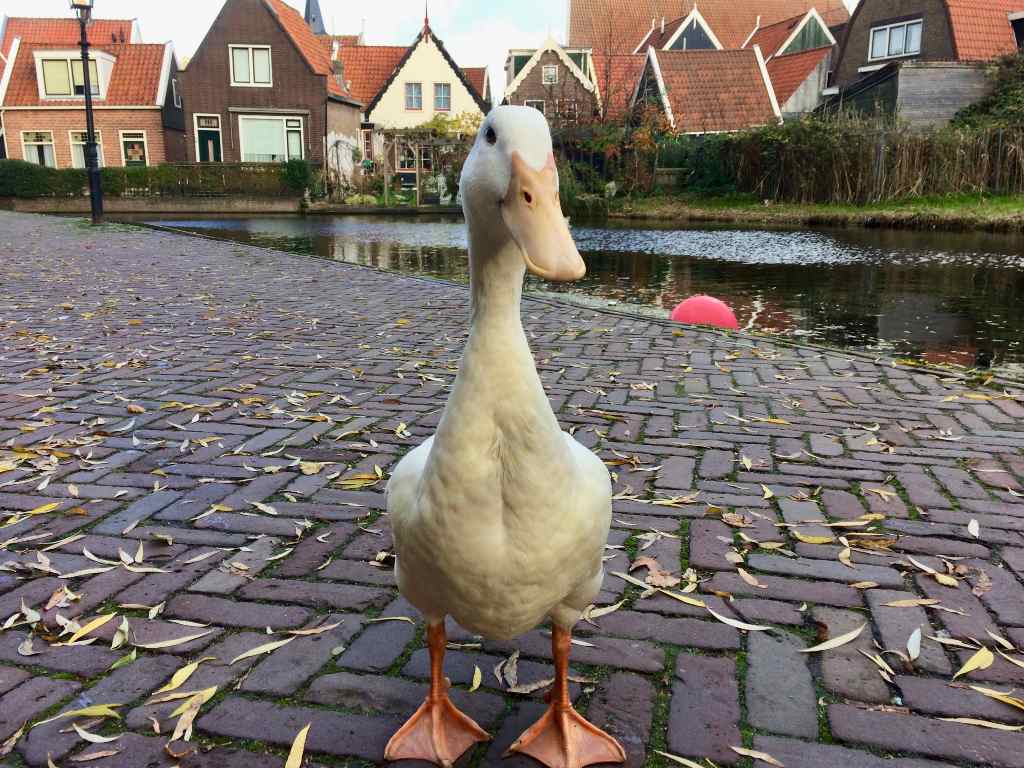 The town arose when a dam was erected in the peat stream Ye or E in the 13th century. In the 14th century, Edam was granted city rights and the right to construct a port. That became the Voorhaven, which opened into the Zuiderzee via a newly dug canal. The town flourished and around 1500 it got city walls.

The mouth of the dammed peat stream was now ‘vol’, full. This is where the history of the village of Volendam began. The fishermen built their houses on stilts due to the flood hazard. In 1661 the village was given a harbor outside the dyke for the growing fishing fleet.

Just like Amsterdam, Edam has a Dam Square. The warehouses and residential houses from the 17th and 18th centuries resemble the canal houses that were built in Amsterdam in the same period.

Edam has various monuments, such as the former butter market with a striking colonnade. The Town Hall houses the Tourist Office and an exhibition space of the Edam Museum. The main building of that museum is a merchant’s house on the other side of the square. It is furnished as in the 17th century and has a basement floating on the groundwater. The stone bump in front of the museum marks the spot where a lock was built in 1569 to protect the hinterland against flooding. When the harbor became bogged down, the residents destroyed the lock. The new lock was then protected by a brick roof.

In the Breestraat you can see Edam’s oldest wooden house, probably built around 1530. To the north of the old center there was only a monastery for nuns in the Middle Ages. Later on, city farms were added. The meadows and fields were outside the city and were often only accessible by boat.

At the beginning of the 15th century there was still enough space in this district for the construction of the Grote or St. Nicolaaskerk. The church was originally dedicated to St. Nicholas, the patron saint of seafarers, but later passed into Protestant hands. The stained glass windows from the early 17th century are the most beautiful in Holland.

The Schepenmakersdijk used to be next to an important waterway between the Zuiderzee and a former inland lake, the Purmer. The striking fence belongs to the Gemeenlandshuis, which was fenced in 1701 on the site of a shipyard. This was the seat of the Water Control Board that had the Damsluis built. On the left you can see the tea domes of some mansions. Then you will come to the Kwakel Bridge, a draw bridge that rises by tugging the chain.

If you walk up the bridge you can see an ancient shipyard on the right. Edam once counted more than thirty of these yards. Remnants of a time when Edam was quite a powerful city.