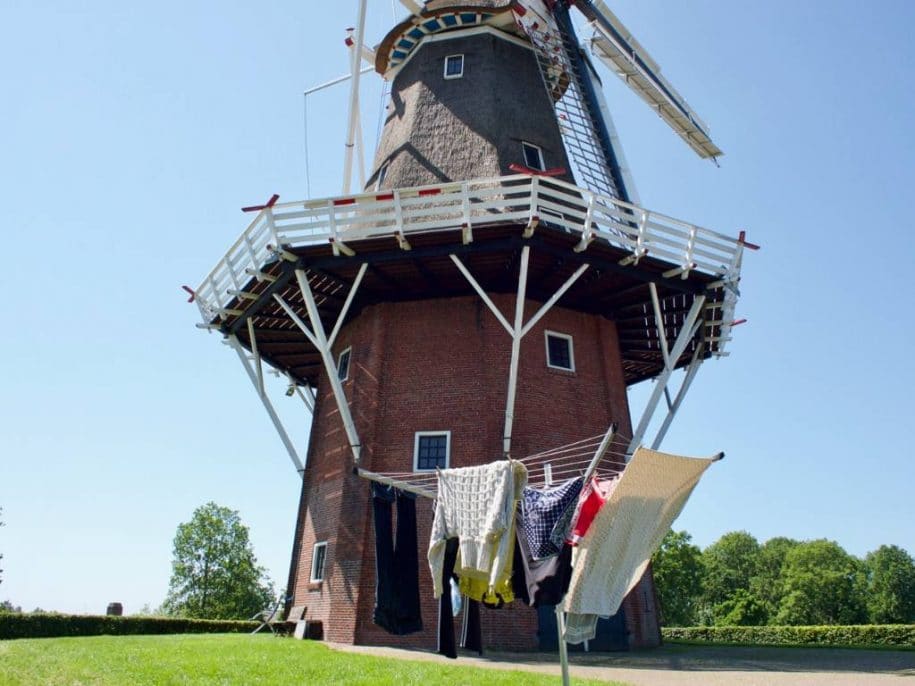 Looking for a windmill tour from Amsterdam? Located 20 minutes north of Amsterdam, the Zaanse Schans offers a perfectly preserved glimpse into the Dutch industrial past with its windmills, traditional houses and workshops.

Step back in time, to the old Dutch world of windmills.

Looking at a Dutch windmill in the flat landscape, it seems as though it is a completely independent machine. A sturdy piece of engineering that will work on its own.

Nothing could be further from the truth. A Dutch windmill needs constant care from the miller, from the moment it starts turning. If a miller doesn’t take care, a windmill is a lethal machine indeed!

Thousand ways to die as a miller

There are a thousand ways to die as a miller. Imagine how the miller has to give the sails a push in the morning, so the sails catch the wind and start turning. The miller has to run, on a high platform wet with rain, with the second sail fast closing in to the back of his head…Or imagine all the wheels, gears and open moving parts inside a mill, in a time without any safety standards.

That’s why lots of millers wear wooden shoes. They are the best safety shoes in the world. And the best thing – for the Dutch, that is: they’re cheap!

And then there’s the main danger: the weather. In the old days, the life of a miller was completely ruled by the wind. There could be days on end without wind. Which meant no work.

Suddenly, the wind could pick up and blow for days. Then the miller and his family had to work day and night, without any sleep. Sleep deprivation make you careless, so you can imagine most millers had missing fingers.

Another danger were lightning strikes. Accidents usually occurred when a miller saw a thunderstorm too late, and was hit by lightning as he climbed up the platform to stop the sails.

A Dutch windmill, by the way, has a break. It’s the stick pointing out on the back of the mill, with a rope hanging from it. Just pull the rope and the mill stops.

The windmills posed an enormous fire hazard, too. All this friction on wooden cogwheels, saw dust or flour everywhere, thatched roofs…it seems just sneezing too hard can make a windmill explode in flames.

See the windmills blowing in the wind

A bit about the life of a miller

Needless to say that a miller felt a great connection to his mill…his, because there hardly were any female millers. Only with the most simple windmills the men felt confident enough to leave it to a woman.

A miller was married to his mill and usually his son inherited the windmill. If the millers had more sons, the parents always tried to find a mill in the vicinity. And miller families only married other millers. In the end, all miller families were related to each other! In Holland there are some typical miller family names, like Schuurman and Borst.

Often the family lived inside the mill. They had to do with what room was left, because all the space was filled up with gears and tools, raw materials and finished products. Very cramped!

If a miller had a lot of children it was difficult to find a sleeping place for them. They had to sleep together in one closet-bed, often way up in top of the mill. Imagine these children on a stormy night, their parents burning the midnight oil.

For some millers, life was a bit more comfortable. If they could afford it, they build a proper house next to the mill. Not that they would actually use it. They would keep it nice and tidy. In the evening would go back to the mill to sleep.

Come and see how the miller lives

Visit a miller family during windmill tour from Amsterdam

The Zaan district is the oldest industrial area of Western Europe. Once over 600 windmills were active at the same time. Today you can see how the mills saw wood, produce oil, pigments and spices. The miller welcomes you inside.

On the Zaanse Schans there are three famous windmills:

The volunteers in these windmills are totally in love with their mill. They love sharing their passion.

In the Zaanse Schans, a miller usually owned multiple industrial mills. The miller was a high ranking man within the community, on the same standing as the major and the vicar. He needed brains to operate a mill and good social skills to deal with the customers.

When customers came to deliver the raw materials or to collect the finished product, the miller always had some free time for gossip and local news.

Millers were well informed, but not always well liked. A miller was paid in kind, usually one sixteenth of what he milled. He took his share with a special shovel and of course many customers thought the ‘mighty shoveler’ took too much.

Walk along the windmills with the miller or his wife. They share stories about their traditions and explain the function of the different mills.

And of course there was a lot of superstition. Mills usually were far out in the fields, away from the village, to catch more wind…it was easy to fantasize about mysterious things going on.

After the Second World War, there was hardly anybody in Holland that wanted to be a miller. But today there are lots of young people that want to learn the trade. That’s why you will see both old millers and their apprentices on the Zaanse Schans. At present there are about 1400 certified millers in The Netherlands!

Visit the windmills of the Zaanse Schans