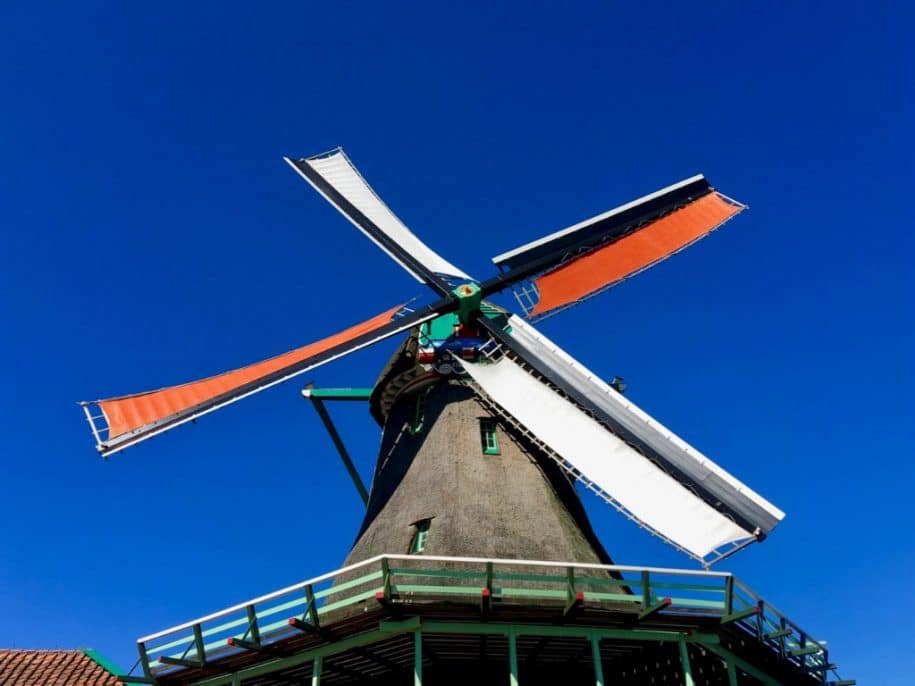 Go and see the Zaanse schans windmills Amsterdam. Located 20 minutes north of Amsterdam, the Zaanse Schans offers a perfectly preserved glimpse into the Dutch industrial past with its windmills and workshops.

Step back in time to the old Dutch world of the Zaanse Schans windmills Amsterdam.

Dutch windmills are marvelous machines. They share a lot of technology with old sailing ships. The Zaan area had many shipyards and carpenters copied this technology to the windmills.

In the Seventeenth Century local engineers made all kinds of other inventions to make the windmills as efficient as they could. Their best invention was the rotating cap.

Experience the technical wonders of the Dutch windmills

You can point a Dutch windmill into the wind, 360 degrees. In the morning the miller gets up on the platform under the sails and checks out the wind. He then turns the sails into the wind, by turning a big cogwheel that connects to the rotating cap. After locking the cap in place, the sails are good to go.

No matter the force or the direction of the wind, a Dutch windmill will work!

These big Cap winder windmills deliver about 35 horse power, all free power. Well, that is until the Dutch nobility heard about it. ‘The wind is not free’, they said, ‘it comes from God. We are chosen by God to rule, so the wind is ours’.

The local lord owned the ‘wind rights’ in his domain. The local millers had to pay him ‘wind money’ to operate mills.

Whether or not God as anything to do with it, Holland is blessed with a lot of wind. Every day it comes from another direction. So it’s always a surprise to see the skyline of the Zaanse Schans. The windmills are pointed to a different direction every day.

Back in the Seventeenth and Eighteenth Century there were about 600 to 700 windmills in this area, making all kinds of products. These product were exported all over the world.

One industry was paper making. Paper was made with old rags. Did you know the paper on which the American Declaration of Independence was written, was made in a windmill in the Zaanse Schans?

The Zaan district is the oldest industrial area of Western Europe. Once over 600 windmills were active at the same time. Today you can see how the mills saw wood, produce oil, pigments and spices. The miller welcomes you inside.

Visit the Zaan district and the windmills

The main industry of the Zaanse Schans was wood. About half of the mills were saw mills.

The trees came from the Baltics or the Black Forest in Germany. Huge rafts with logs floated down the Rhine to the Zaanse Schans. The logs were stored in the river for two years. Planks from waterlogged wood stay perfectly straight after cutting and drying.

Cap winder sawmill Het Jonge Schaap still produces these artisanal wooden planks, for the thousands of old ships and wooden houses in Holland. It’s one of the best mills to visit on the Zaanse Schans on a windy day.

By the mid-1900’s there were ten thousand windmills in The Netherlands. But it went downhill from there. After the Industrial Revolution the factories converted to steam engines. Later, these were replaced by electrical engines.

The picture of hundreds of windmill sails cutting through the sky was replaced by a forest of chimneys, belching out black smoke.

A windmill needs TLC. If it’s not used, a windmill will fall apart quickly. It’s a living machine. Lots of old windmills were demolished in the 30’s and 40’s. In the Zaan area, windmills were sold for ‘break down prices’ as scrap.

After the Second World War there were hardly any windmills left. It wasn’t until 1960 that windmills became protected monuments.

In the 60’s a couple of volunteers from the Zaan region tried to rescue what was left of this wonderful heritage. They collected the last remaining pieces: a millstone here, a sail there…

A piece of land was set aside to preserve this heritage. Sometimes whole mills were put piecemeal on big trucks and transported to the Zaanse Schans, foot by foot through the small street of this area.

Today, there are about a thousand windmills in Holland and the number is growing. Every town in Holland dreams about owning a functioning windmill. It’s like a status symbol! The Dutch government helps them make this dream come true and assist with funding.

Walk along the windmills with the millers. They share stories about their traditions and explain the function of the different mills.

Holland Windmills provides a carefree package for your holiday in Holland and Amsterdam: an easy pickup point, smooth transport to Zaanse Schans windmills Amsterdam. See the best Holland has to offer outside of Amsterdam, book your windmill tour from Amsterdam with Holland Windmills.