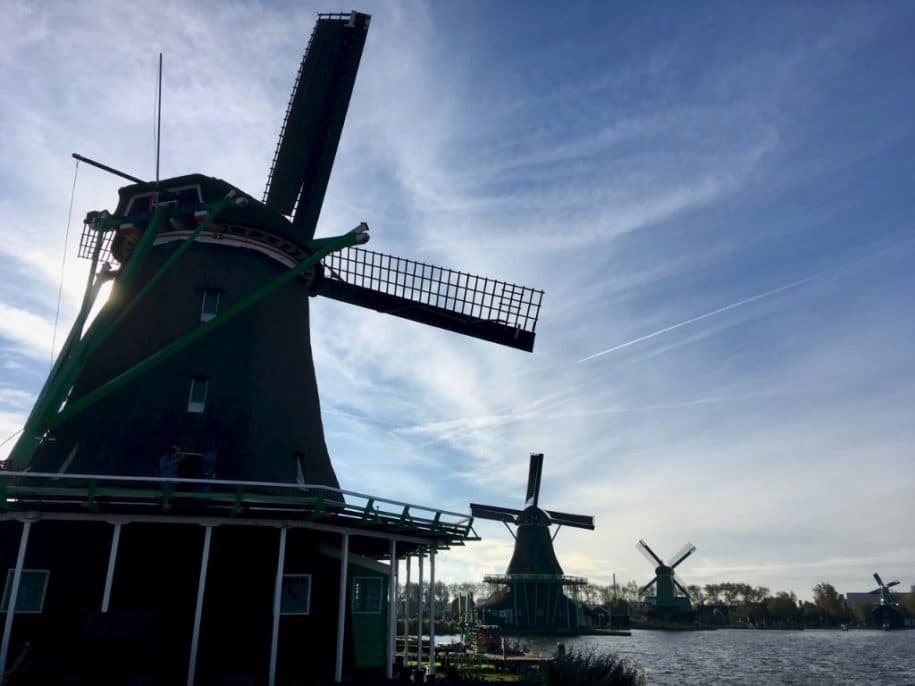 Experience the Zaanse schans windmills. The spinning windmills make for a typical Dutch picture, that attracts hundreds of thousands of visitors every year.

Holland Windmills provides a carefree package for your holiday in Holland and Amsterdam: an easy pickup point, smooth transport from Amsterdam to visit the Zaanse Schans windmills.

Our local guides will make sure you’ll avoid the crowds for a nice day to the Zaanse Schans windmills.

Tour to the Zaanse Schans windmills

Most of the Zaanse Schans windmills came from elsewhere and were rebuild or reconstructed here. The same goes for the typical green houses in this area.

The Zaanse Schans windmills and the buildings give an example on what this area looked like in the 17th and 18 century.

The entrance to the Zaanse Schans area is free. Entrance to each of the large windmills is €4,50.

Next to the Zaanse Schans, contemporary buildings house the Zaans Museum and the Verkade Pavilion. Here you can learn all about some of the best products that are still made in the Zaan area: chocolate and cookies.

Standing on the levee of the Zaanse Schans, you will see a residential area on the other side of the river. The old houses date from the same period as the mills. In the gardens you can spot ‘good year’s endings’, additions to the houses that the owners build when business was good. These wealthy businessmen also showed off by planting ornamental gardens.

The most beautiful house at this side of the river is Museum Honig Breethuis. The house shows the incredible wealth of the owners.

See the oldest of the Zaanse schans windmills

A couple of minutes walking further is one of the most famous mills, verfmolen De Kat. Paint mill The Cat is one of the oldest of the Zaanse Schans windmills.

The ‘first Cat’ was build in 1646, when owner Adriaan Gerritsz van Someren was granted the ‘right of wind’. Business probably wasn’t very good, because De Kat was bought in 1664 by Amsterdammer Tobias van Doorning from the bankrupt estate of Gerritsz. He converted De Kat into an oil mill.

In 1782 this first De Kat burned down. The owner, Claas Honig, had a new mill built within two years. This second De Kat stood for more than a century, but in November 1904 it was demolished to the barn. A fate shared by many mills at that time.

In 1960, the De Zaansche Molen association became the owner of this shed, after which De Kat started his third life with the body of the De Duinjager painting mill. From then on, De Kat was a paint mill.

It’s one of the main attractions on the Zaanse Schans with more than 100.000 visitors per year.

De Kat produces pigments for paintings, exactly like it was done by the Dutch masters of the 17th century, like Rembrandt or Vermeer. The miller knows how to make hundreds of colours. He makes them with different natural materials, like chalk (for white paint) or lapis lazuli stones (for blue paint). Burnt bones make a nice deep black.

The paint miller of De Kat is the only one in the world with this know-how. The miller has famous customers, like the Louvre in Paris and the Vatican Museum. Whenever an old painting needs restoration, paint mill De Kat is the first stop.

Visit the windmill De Kat yourself

You can also have a look at the wooden shoe maker in the Klompenmakerij, a building from 1721. The clog maker will demonstrate how a wooden shoe is made from a fresh log. In the blink of an eye he will produce a wooden shoe.

Clogs are still very popular in Holland. They are cheap, waterproof and very sturdy, and make for excellent safety shoes. With a couple of thick socks they are even quite comfortable. They are worn by farmers: if a cow stands on your feet, the clog will just sink in the mud.

Next door is kaasmakerij De Catherina hoeve, an old cheese farm where you can sample and buy cheese. At the arts and craft centre you can fill up on souvenirs. It also has workplaces for glass blowers and Delft pottery makers.

Antique’s shop Trash & Treasures is based in the oldest house of the Zaanse Schans from the 1600’s. Here you can browse for old china, art and souvenirs.

It’s a wonderful crooked old building with lots of old trinkets and knick knacks. In the back room there are bedstedes, bed-closets where the family of this house used to sleep in. Adults slept sitting upright, because lying down was associated with death. The children slept in a drawer under the bed.

One of our favorite buildings is the bakery museum In de Gecroonde Duyvekater. It’s heaven for candy lovers and cookie aficionado’s. The bakery makes fresh Belgian waffles and sells typical Dutch delicacies like speculaas (cinnamon and ginger cookies) and stroopwafels (thin wafers with syrup). Some of our guests to the Zaanse Schans windmills don’t make it any further than this shop.

Experience the Zaanse schans windmills yourself

Book your tour to the Zaanse schans windmills

We provide small group tours to the famous Zaanse Schands windmills near Amsterdam. Our local guides will make sure you’ll avoid the crowds for a nice day out in the countryside.

Holland Windmills takes away the hassle of figuring out transport and which windmill to see.